Exactly 30 years ago to this hour at 3 P.M. on Friday, July 17, 1987, ten lives were wasted when a band of Maoist communist rebels ambushed a joint patrol of the 348th PC Company and the Liloan Police Station, INP at Sitio Kandagit, Barangay Tabla, Liloan town in the mid-north section of Cebu province.

Came to be known as Liloan Ambush, the atrocity is the worst ever committed by the Communist Party of the Philippines-New People’s Army (CPP-NPA) in Cebu island province then led by a certain Jesus Villanueva.

Killed in the vehicular ambush were six constables of the 348th PC Company led by 1Lt Ariza and included MSgt Mindajao and CIC Bongo, two policemen of the Liloan Police Station, Arturo Laag of the Kontra Komunismo (KOKO) and a local member of the NPA who came from the ranks of the Kilusang Mayo Uno (KMU).

The PC-INP team onboard a Toyota Land Rover patrol vehicle of the 348th PC Company then based at the foot of the first Mandaue-Mactan Bridge in Barangay Omapad, Mandaue City was coming back after it checked a report on the presence of Benjie Tagalog, a local NPA militia who was wounded in a previous encounter, at Sitio Maylao, Barangay Lataban, also in Liloan.

Since the area had no road yet during that time, the PC-INP patrol team had motored up to Sitio Kanagahan in Barangay Tabla where they left the patrol vehicle but under guard by KOKO members in the area. When the lawmen failed to catch Tagalog, they went back to Sitio Kanagahan for late lunch.

About 2 P.M., the team decided to travel downhill despite the repeated warning by KOKO members that the NPA was preparing to ambush them along the way. “Maniwala ka diyan,” was said to be the dismissive reply of Lt Ariza, a Samar combat veteran.

After guiding the patrol team in its mission that day, Laag took a hitch ride in the patrol vehicle on his way to work in Mandaue City.

Early in the morning that fateful Friday, Bonifacio “Pasyo” Pepito, KOKO leader in Liloan and resident of Sitio Kanagahan, hiked around the mountains of the adjacent Compostela and Danao City to be able to take a ride to Cebu City in order to report to this writer the presence of heavily armed NPA men at Sitio Kandagit that planned to carry out an ambush against our group that was normally scheduled to conduct routine Primary Health Care (PHC) and community organizing activities in Barangay Tabla and adjacent villages together with the Special Operation Team (SOT) and the Health Service Department of the Associated Labor Unions-Trade Union Congress of the Philippines (ALU-TUCP) that had hundreds of members in the town.

We cancelled our scheduled activities on Monday and Wednesday before precisely because of reports on the presence of heavily armed NPA men in the mountains of the neighboring towns of Liloan, Consolacion, Compostela and the adjacent Barangay Mabini of Cebu City.

Two hours before the ambush, this writer and the late Pasyo Pepito were sitting at the Camp Lapulapu office of then Lt Col Roy Kyamko, RUC 7 deputy commander for intelligence (U2) who later rose to Lt. Gen. to become SouthCom commander, while waiting for action on our report.

We noticed, however, that military choppers were busy ferrying troops that afternoon to the encounter site with another NPA band, which we later believed to be a decoy, somewhere in Guadalupe, Cebu City.

When this writer returned to his office past 5 P.M., he personally received a radio-phone patch call from the Barangay Captain of Lataban via our shoreline base at Barangay Estaca, Compostela informing him of the unfortunate ambush.

Today, a lowly historical marker carved on a marble slab that has been mounted on a concrete cast lay aside on a cliff along the mountain road to bear witness the carnage that took place on the exact spot 34 years ago.

KOKO and the Federation of Anti-Communism Movements in Cebu (FACOM-CEBU) dedicated the Liloan Ambush marker on its first commemoration to honor the eight law enforcers and one civilian volunteer that died in defense of freedom and democracy.

The last 30 years, no one in the government has taken care to erect a more fitting historical monument for the Liloan heroes or even to annually commemorate their ultimate sacrifice.

Without the dedication and sacrifice of these heroes, some soldiers, policemen and civilian volunteers, Liloan would not have developed into a bustling first class municipality it is today.

In Photo:
The small marker at the ambush site in Sitio Kandagit, Brgy Tabla, Liloan, Cebu which we put up on its first anniversary on 17 July 1988. Ka Art hopes the PNP — the successor of the PC-INP which lost 8 men in the worst NPA atrocity in Cebu — would care to commemorate its 34th anniversary on Saturday, 17 July 2021. 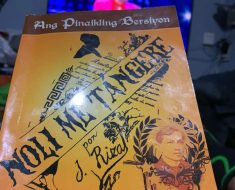